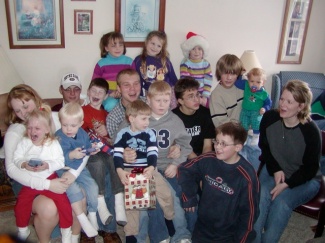 My four children love nothing more than to get together and discuss my lack of parenting skills.

My two youngest boys like to reminisce about the day I became irate with their behavior and grounded them and two neighbor boys.

They tried their best to tell me, but I was in the middle of a Maternal Grounding Rant.

“Not another word! You’re grounded!”

I stared at the two boys. They looked vaguely familiar. Still, I wasn’t convinced they weren’t mine. Hadn’t they just spent the last two nights on our sofa, playing video games while eating our chips and drinking our soda?

The smaller boy even had the same sloping Sade nose and looked a little like one of my brothers, which would be his uncle, if he was indeed my child.

After the two boys ran screaming out the back door is when I realized that my two older children no longer lived with me, and I had once again overgrounded.

My dad had the same disciplinarian dementia.

Mom and Dad had eight kids, one neighbor had 13, another had 11 and several others had at least five or six kids.  The adults in the neighborhood were always legitimately confused as to who belonged to whom.

My siblings and I learned to wait until loud, rumbling snores were being emitted from the depths of the recliner before breaking curfew. When Dad was in that state, getting past him and sliding unobserved into the bedroom was a breeze. But, this was only possible when my mom, a nurse, worked the night shift. Mom always caught you, sometimes even interrupting your thought process as you were making plans to sneak out: “I know what you’re thinking about doing and, well, don’t even think about it.” 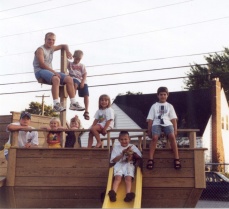 She was psychic and could thwart bad behavior before I had even thought of committing the crime: “If you are thinking of telling me you are going to Susan’s for the night while she tells her mother that she’s coming over here for the night and then running around all night, TPing houses and smoking cigarettes, forget it — you’re not going.”

Geesh, not once had my plans included smoking cigarettes, and I was kind of peeved that my mom was more of an all-inclusive and proactive party planner than I was.

One night, while mom was working and dad was in charge, my brother Paul and his friend Billy were supposed to be having a sleepover upstairs. Of course, the second they heard the freight train of sonic snores, they were out and about, doing whatever stupid things unsupervised teens do when they are out and about, while Dad continued to snore peacefully in the recliner.

The boys came home well after midnight and, using the outside rose trellis, climbed to Paul’s second floor bedroom as they had done many times before.  But that was when they were younger and smaller.

The trellis creaked and groaned before cracking in half and falling to the ground, burying Billy and Paul in an avalanche of prickly, but aromatic, roses and splintered boards.

The crash woke the dead. And my father.

He was furious —  mostly for being awakened —  and grounded them both for two weeks.

He would not listen to anyone who suggested that there might be legal ramifications involved in grounding a kid who is not really your kid.

My dad was from the era of “if you’re in my house, you abide by my rules.”

I’d like to address the parents of fourth graders everywhere throughout the world:

Isn’t that the year the teachers send home those wonderful, little musical instruments called flutophones or recorders? They are meant to teach the kids the basics of music, but only end up leading parents to the Xanex Horn of Plenty.

The flutophone – sometimes referred to as the Horn of Eternal Darkness – is a direct link to non-smoking parents going out to buy a pack of cigarettes and never being heard from again.

When my first two children brought home this adorable instrument I was just as excited as they were. With my third and fourth – well, not so much.

The year my third child gleefully unpacked his new flutophone, I sighed and feigned excitement through clenched teeth.

“Hey mom, listen – want to hear me play “My Bonnie Likes to Smear on the Lotion?”

He proceeded to emit sounds that reminded me of the time ole’ Mama Cat got tangled in our new turbo engine weedwacker.

I grinned – or maybe grimaced – and told him how wonderful he sounded.

The youngest, a second grader, screamed and ran to his room. The two older kids, who hadn’t cracked a book since adolescence discovered them and they discovered “My Changing Body”, sprinted out the back door, saying they were going to friend’s house to do homework.

Obviously, the cat and his siblings had no appreciation of the Fine Arts, I said, trying to console the fourth-grader.

Later, during the umpteenth rendition of “East Side, West Side, Come and Get This Clown,” my unadulterated admiration and pride began to wane.

“Listen, hon,” I said. “You sound great. But maybe you could just take it into your bedroom for a while? Mommy’s got a nasty headache.”

Which he did. Until the second-grader came sprinting out of the bedroom yelling, “Make him stop! Make him stop! It’s making my eyes roll up and drop out to the ground and my legs and arms twist in circles like this!” (wild gyrations, eye rolling and flailing of limbs)

I then sent the fourth-grader into the bathroom to shut the door and practice his concerto.

As I walked back to the kitchen, I violently kicked the recorder case into the next room.

About eight minutes after he moved into the bathroom and began rehearsing “She’ll be Humming Around the Fountain,” I asked him to please move to the basement and kindly shut all the windows and doors.

Soon he was crouched on top of the washer and dryer in the basement practicing, “I’ve Been Working on the Dead Toad,” while the second-grader and I sat on the sofa and tried to stuff throw pillows into our ear canals.

Seconds before the pulsating vein exploded and hemorrhaged in my frontal lobe, I decided distraction was the only way out.

“Let’s go for a walk!” I announced, and soon all three of us were outside walking, the second grader and I now communicating through sign language.

As we approached the home of another fourth grader on our block, we heard the familiar sounds of the recorder wafting from the basement.

I nodded sympathetically at the boy’s mother and father, who were sitting on the front porch, rocking psychotically. They were not in rocking chairs.

They nodded and smiled vacantly while filling their mouths with sharp stones and stirring them with wooded spatulas.

Or maybe they were just gritting their teeth.

Either way, that fourth grade year is eternal.