After living 12 years in a home that did not have a tub, only a shower, we moved into a residence a few months ago that – oh my god – had a tub.

But, I usually habitually jumped in the shower and never gave the tub a second thought. I forgot I had a tub, even as I stood in it to take a shower.

Last weekend, while watching a movie where the female lead took a bubble bath surrounded by candles and sipped on a glass of wine as she soaked, I had an epiphany.

Unfortunately, I also have ADD, which I forget to calculate into any speculative life skills operations.

Anyway, I was so excited at the prospect, I did not notice that the woman in the movie was in a very expensive, spa-type tub with a wide berth of marble enclosing three sides – perfect for setting candles and glasses of wine.

I have a narrow ledge around a polycomposite tub and enclosure with a plastic shower curtain liner hanging in close proximity.

(I’ve been working a long time to work polycomposite into a column.)

I started the water, adding a generous amount of bubbly.

I took a sip of wine.

I lit the candles.

I took off my clothes.

I had another sip of wine.

I took the shower curtain and liner and hung them on the door hook soon after I smelled something strange and the liner appeared extremely warm to the touch.

I took a big swallow of wine.

Wow. Something smelled toxic. I checked the shower curtain again and the toilet and under the sink.

I put cleansing cream on my face.

My white blood cells were dying. What was that smell?

I threw a towel around my torso and traipsed to the kitchen to reload.

I told my husband something stunk as I walked back to the bathroom. He agreed.

Back in the bathroom, I removed the towel. 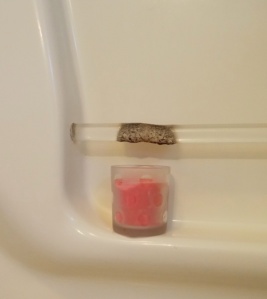 I took a big gulp of wine.

I looked in the mirror to remove the face cream.

I saw flames a foot high behind me in the mirror.

It was coming from one of the lit candles I had set in the molded tub shelf that was meant for soap and other bath necessities which, I’m assuming, did not mean candles.

A THICK plexiglass bar – meant to hold washcloths – was less than two inches from the burning wick.

As the bar melted and dripped into the burning candle, it created shooting shards of fire. The smell was reminiscent of my childhood when the neighbor used to burn old tires in his back yard and stink up the entire town.

It was in an age before awareness of “carbon footprints.”

But, even then, my mother knew. She would make my brothers and me come into the house and then tell us not to breathe.

I violently smacked the candle into the bubble bath, slopping burning wax all over the tub walls and my BARE limbs.

I flopped around the bathroom, doing the naked, over-the-hill-woman-on-fire dance – painful and unattractive.

The candle was immediately extinguished, although the bar was black and dripping and would be warm to the touch an hour later.

I power-downed the glass of wine.

And then, I took a shower.