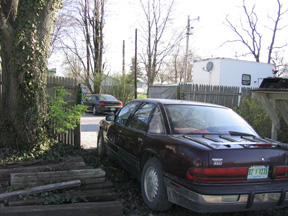 But nothing makes me cry like teenagers, especially teens who have passed their driver’s test. But what brings me to my knees is seeing the insurance premiums for two newly licensed teens — the result is all out convulsing, gut-wrenching, snot-running sobbing.

I subscribe to the sage advice of two late, great female humorists who said, “The best way to keep children at home is to make the home atmosphere pleasant, and let the air out of the tires,” (Dorothy Parker) and, “Never lend your car to anyone to whom you have given birth,” (Erma Bombeck).

It turns out I don’t have the let the air out of the tires – the high cost of petrol has taken care of that.

When my youngest got his license at the age of 16, he ran out of gas within 48 hours.

He was forced to hoof it for about two miles.

We used to find his little used S-10 randomly abandoned everywhere when he ran out of gas. I once had to walk around it in the middle of the driveway. My car and his 18-year-old brother’s car were blocked in for 24 hours until he scraped up enough change on his floor to buy gas.

The 18-year-old didn’t seem to run out of gas so frequently. This is because either: a) he has a part-time job and has more readily available cash; b) he’s learned the economical skill of siphoning; or c) he has a lot of down driving time because he tends to crash into things.

My fairly frequent and frantic one-sided phone conversations with my two youngest and other involved parties sounded something like this:

To the 16-year-old: “No, don’t drive to school. It’s four blocks! I don’t care. Use an umbrella. Since when are they only for sissies? When I was your age, I couldn’t afford gas or a car. Heck, I couldn’t afford a bicycle. I walked miles to school and … Hullo? … Hullo?”

To the 18-year-old: “So, had you noticed your brakes acting funny before this happened? Through the hedge over the fence and then hit the neighbor’s truck? The neighbor to the south? The important thing is that you aren’t hurt and you didn’t run over the neighbor … You didn’t run over the neighbor, right? Yes, you still have to go to school. Just walk. That’s where you use those appendages called legs and put one in front of the other. I’ll come home and call the insurance company. When I was a teen, I wasn’t  lucky enough to have a car. I sometimes had to Pogostick to school … Hullo?”

To the police: “That’s it – the Buick on top of the fence with the front end kinda sitting on top of the neighbor’s truck. No, that bumper was already ripped off from last month when he hit his grandpa’s fence. Oh yeah, the back window was already broke out after he locked his keys in the car and couldn’t think of a better way to get inside.” 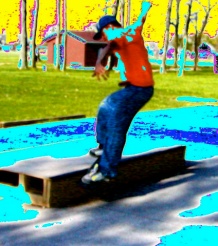 To the wrecker service: “That’s right, the Buick on top of the fence and the neighbor’s truck. The start key is broke off in the ignition. Just insert a screwdriver in there and give it a little twist to the right and then jiggle it until it starts.”

To the neighbor to the south: “In another life I was childless. Really.”

To the 16-year-old: No more money for gas! There’s a thing in America called a j-o-b. When I was your age I walked to Illinois, Ohio, and Michigan, planting apple tree seeds and wearing a pan on my head … okay, okay, that was Johnny Appleseed, but you get my point.”

To the 18-year-old: “Good grief! Your accelerator stuck and it’s been sticking for six months?! You drove through a two neighbors’ yards and crashed into a cement post? The same neighbor? No? Oh, the ones to the north. That’s good. A different set of neighbors. The important thing is you are not hurt and no one was in their yards or sitting on the post, right? Right? I’ll be right there. Yes, you will be late, but you are going to school. Yes – just walk. When I was your age … Hullo?”

To the wrecker service: “Yes, the same Buick you towed a few weeks ago, only this time it’s on top of a fence post near the two neighbors to the north. Remember how to jiggle the ignition? Nothing’s changed. Well, except if you need something from the trunk, go in through the back seat,  because the latch is broken.”

To the police: “Yes, I know, I know. This time it’s a different neighbor. What do you mean? Yes, I’m serious. No, I haven’t considered changing his name from Christopher to Crashtopher, but thanks for the suggestion. Are you laughing? My son could have been hurt!”

To the neighbors to the north: In another life, I was completely sane. Really.”

To the 16-year-old: “Okay, so far you are a better driver than your brother, but don’t get all smug. It’s only because you’ve never had enough gas to drive more than 12 feet. And no, I won’t reward you with $20.”

With the radio: “All of a sudden, a rod started knockin’, down in the depths, she started a-rockin’ … Well, they arrested me and put me in jail, I called my mama to make my bail, and she said, ‘Son, you’re gonna drive me to drinkin’ if you don’t stop driving that hot – rod – Lincoln.’ “

To the insurance company: (in my best Dr. Evil voice) “So, two teens plus two wrecks equals two meeellllyun dollars?”

To the bartender: “Give me another. I’m walking.”

by viv sade, a woman constantly in search of her lost youth and car keys.